Dealing with an oversaturated detector element

It can happen, usually by putting A LOT of flux onto the fluorescence detector, that your fluorescence data starts looking simply awful.  Here is an example:

In this case, the problem is that detector element #3 has begun responding extremely non-linearly.  This is probably the result of having been exposed to more than a million counts per second, perhaps by being exposed to a diffraction peak coming from the sample. You might be able to recover your data simply by excluding the problematic element when importing the data into Athena.  Note that, above, all four DTC channels are being included in the sum.  In the picture below, DTC3 has been unticked in the column selection dialog. Doing so results in profoundly more sensible data.

FIxing the oversaturation problem by power cycling the detector

Even better than excluding a problematic channel is to have all the channels working correctly in the first place.  Here are instructions for power cyclilng the detector.

Underneath the optical table, partically obscured by one of the supports of the blue frame, you will find this box: 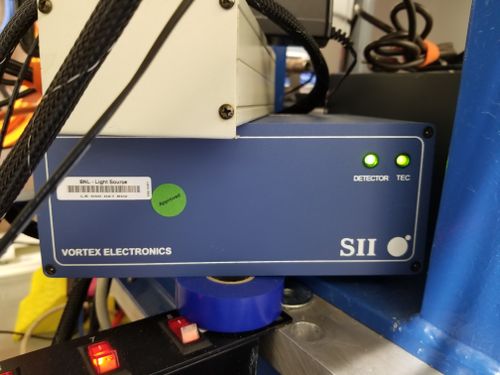 Once the TEC light is green, you are ready to resume using the fluorescence detector.  Fingers crossed -- the problematic channel will be responding normally again!